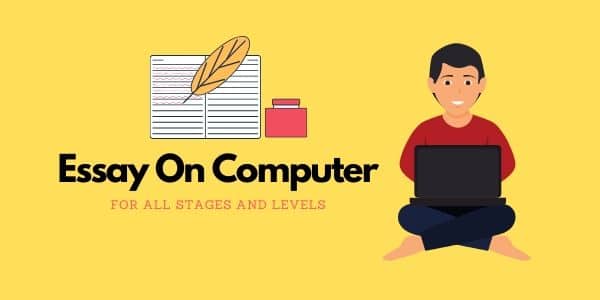 A computer is an electronic machine that can calculate Millions of data in a second. A computer can perform every task that builds into it. The computer can be used to play, study and even to get information.

A computer is an electronic device. The computer is one of the great inventions of the modern era. A computer is a machine that has the capability to store a large amount of data. The computer works as we have to give input to it, then it does the process and after that, it gives the result as output. It is a  very simple machine, even a child can handle it. It is not only easy but also a very reliable machine. The computer gives us permission to make changes to it. A computer is a very useful machine used in offices, banks, educational sectors, etc.

150+ words of My Computer Essay

A computer is a great gift of God for the whole of mankind, was first discovered by Pascals called Charle’s Babbage (first mechanical computer) in the 19th century. And now becoming an important need of the modern era. Generally used to analyze and calculate the data fed into it.

A computer can perform millions of calculations within a second. It can be used for playing games, performing the task, getting knowledge and etc.

But nowadays a computer is used to perform many tasks. Computers are commonly used in offices, laboratories, schools, banks and etc.

A computer has many advantages, it is a great source to get knowledge and information. In modern countries, it is used as traffic police, bus driver and even in the place of a pilot.

We can’t count its advantages. It saves time and provides reliable information. Now we don’t need to go here and there to read and buy books, we can read online!

On the other hand, there are some disadvantages also. Like wrong use of Social platforms, Playing games whole day and etc.

Although it’s advantages are outweighed from the disadvantages!

My Computer Essay of 250+ words

Thousands of years ago men used to live in caves and spend their lives with all that he gets to complete their needs and had to satisfy on that. Their life was narrow, dark, and limited. As there is a common phrase “time changes” and definitely time changed but on the other hand human change too and did a lot of inventions for their benefits. In which one of the greatest inventions is the computer.

A computer is an electronic machine that performs a variety of tasks, such as long and complicated mathematical calculations and provides information of all kinds. The computer acts as a data processing device and stores a huge amount of data. The data is of any type like pictures, photographs, text, voice numbers, and other types of information.

The data or instructions which we give to the computer is called input data, then it does process and after that, the data which it gives is called as output data. The computer is one of the easiest and reliable devices to use.

Teachers, doctors, banks, and other government or private departments, and almost all educational institutions are using the computer because they not only stand for accuracy and speed but save human labor and time also. As, computers are correct and accurate data processors, informers, recorders, and preservers of knowledge.

Computer education helps in modern life including information and contact with people all around the world. The computer serves as telecommunications and the internet. Now computers are the mate of everybody. Therefore, the present age can be served as the computer age.

Science is an organized knowledge based on the observation of facts and the discovering of general laws governing the facts. In every era, people have a wish to live with joy and do their work easily. People don’t want to do hard work. They want someone to do their work whether it is human or a machine. So for the sake of people scientist manufactures machines through which human can does his work easily. Therefore, the present age is the age of machines. The inventions of the radio, television, airplanes, speeding cars and flying coaches are all for the benefit of man. Among them, one of the great inventions of scientists is the computer.

A computer is a machine who has made our life easier. It performs many purposes like store information, email, messaging, software programming, calculation, data processing and many more. A desktop computer needs a CPU, a mouse, a keyboard and an LCD for well functioning however the laptop does not need anything to add outside as it is included with all inside. A computer is an electronic device having a large memory that can save any data value.

Teachers, students, doctors, lawyers, departmental stores, banks, and other government or private departments and besides it, the airports, railway, hospitals, and almost all educational institutions are using the computer because they not only stand for accuracy and speed but save human labor and time also. As, computers are correct and accurate data processors, informers, recorders, and preservers of knowledge.

Computer education helps in modern life including information and contact with people all around the world. The computer serves as telecommunications and the internet. Now computers are the mate of everybody. Therefore, the present age can be served as computer age.

WE HOPE THAT YOU ENJOYED READING ALL THE ESSAY ON COMPUTER. 😉